Life is a Series of Stories We Tell Ourselves

Life is a series of stories we tell ourselves. From the first words we speak until those words form sentences that paint word pictures on our mind and our subconscious and create the understanding and framework with which we begin to build our life and affect everyone around us.

We don’t always recognize how powerful the stories are or where they are coming from.

We might not realize until years later how the story of our life, our family our future was chosen. 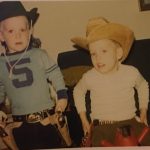 The path has not always been a straight one for Michael. He stuttered as a child and often found it difficult to fit in. The stuttering forced him into a shell to figure out how to cope and relate to the world on his own terms and in his own time.
A similar kid in an urban environment might have been prescribed ADHD meds and confined to a room, but this is not what Michael D. Butler needed! Growing up on the farm in small town Oklahoma was exactly what he needed for it gave him the chance to roam freely with his dog and his brother and experience the adventure God had prepared for him and to develop his imagination and read and write and build. 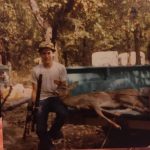 It gave him the chance to run, explore, ride his horse, his motorcycle, play baseball, hunt and fish and be a boy. He loved to read and my how he read. His library card was always maxed out; I think he read every book in his local library and school. This along with Church and summer baseball were his primary forms of entertainment and social outlet.
Within several years the speech would improve and he would discover in 7th grade that public speaking was his new passion. Michael began speaking every chance he got and soon not only came out of his shell but became the class clown along with the many required trips to the Principals office to prove it! 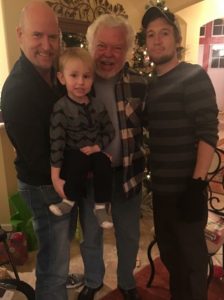 His Uncle, an avid reader, always got Michael and his brother books for Christmas. Many of those books would shape the ideas, character and values that he holds dear to this day.

After college and a decade and a half in ordained ministry Michael felt a calling into the business world. In 2005 when the internet was young, Michael quickly found his knack in internet marketing and author marketing and M3 New Media Social Media|PR Engine for Authors was born.
Always wanting to give back and make a difference Butler would look for challenging things to do. Apart from being a single parent to four sons he found time to run his first marathon in 2008. One of the highlights of his life, he says, was when all four of his sons ran the last three miles with him and crossed the finish line with him.
Donating his time to organizations like Stop Child Trafficking Now, The Demand Project, Truckers Against Trafficking and Oklahomans Against Trafficking Humans (OATH).

His publishing company Beyond Publishing was born as a result of publishing his first book to help end Human Trafficking in 2010. That book More Than Rice a Journey Through the Underworld of Human Trafficking went on to sign a movie deal with a production company out of Vancouver, Canada.

Recently celebrating 53 years of marriage, Michael’s parents have always been his biggest fans. Life would be much different without their unconditional love and support. 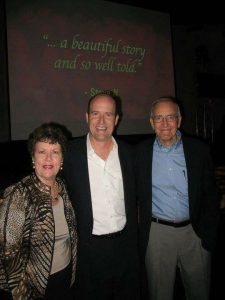 I’ve recently been a little quiet on my blog and busy launching Beyond Publishing. I must say I’m very excited to be in family, travel, goal and friend mode so in addition to running my companies in Los Angeles you’ll see me posting more of my thoughts, opinions and editorials on my blog. Thanks for following and let me hear from you. Leave a comment and a reply and let me know what you are up to and how we met! Thank you!